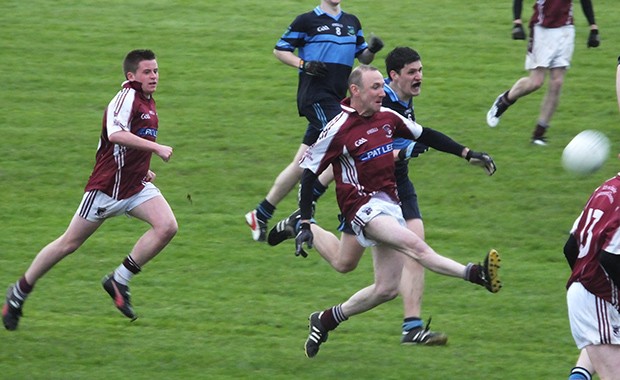 Stratford/Grangecon wasted no time in laying the foundation for success on their home pitch against An Tochar in the fourth round of the Intermediate League.
The slow, lethargic start that had become a feature of our recent disappointments was gone. From the moment Mark Murphy sent over the first score in the first couple of minutes of the game, the home side showed their intent of not allowing the visitors to settle or view the splendid surroundings of Winetavern. For the entire period of the first half aided by a strong wind their 8 pts to 2 pts lead was well justified.
John McCormack and his mentors were well aware at the interval that An Tochar hadn’t travelled to Stratford simply to go through the motions and this proved to be the case as An Tochar opened the second half in a much more determined fashion. Our stand in goalie James Barrett got down brilliantly on a number of occasions to save menacing shots on target.

In a typical Keane ploy one of our full forwards was withdrawn and Mark Landan was drafted into centre half back thus freeing up the experienced Jason Bolger to marshal the rear defence. Despite only scoring 2 points in the second half, their scoring efforts in the first half was enough to hold on to a 3 point victory.
With the expected return of Patrick Cronin and Mark Caplice and a fully fit Mark Landan back from injury, Eoin Burke and Jordan Lawrence should considerably boost the strength of the panel for the first round of the Championship.
Training resumes Tuesday and Friday of the week at 8 o’clock with the Ashford Championship match in Pearses Park, Arklow at 12.30 on Sunday May 10th.