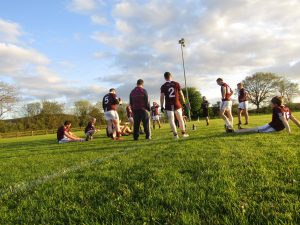 Last Tuesday 8th May we were away to Donard on a perfect evening for a game with good sunshine and no breeze.
Donard were first to score and registered 2 points before Matt Manley opened the scoring for Stratford/Gcon, followed soon after with another point from play by Mark Murphy.

Donard replied with a point from a free and from the kick out Matt Manley won the ball and sent a long pass into full-forward Alan Norton who caught a great ball and made no mistake with a great shot just under the crossbar for an excellent goal.

Donard replied with a point from a free
Goalie Patrick Cronin brought off a brilliant save when a Donard forward got through with goal on his mind but Patrick managed somehow to tip over for a point.
Soon after a breaking ball around the square was sent to the net by Donard who tagged on 4 more points.
Jason Bolger,Ciaran Byrne, Eoin O’Neill scored 3 great points, nearing half time Jason got another good score to leave the score at half time
Stratford-Grangecon 1-6 Donard1-8

Positive reinforcement at half time that we were playing good football and to stick with the plan. Simple direct football, clinical in attack and right in defence.

From the throw in Donard won the ball and pointed from play. Both sides registered wides but soon things started to click for our team and they began to dominate the game.

This resulted in better ball in to the forwards and Kieran Byrne and Alan Norton added 2 points each.
From here to the end it was all Stratford Grangecon.
Colin Byrne was showing for every ball and sent over a good point, Conor Hanly in his first game was doing well on the other side and was very unlucky not to hit the net.

Ross Coogan was now showing his fitness and earned a free which he converted. Colin Byrne, Jason Bolger and Matt Manley sent over a point each.

Donard Glen only managed to score 3 points in the 2nd half mainly due to the pressure of our back line where Eoin & Joe O’Neill and Eric Fenlon fought hard for every ball.

The half backs lead by Paddy Walsh, Ross Coogan and James Barrett were now cutting out the supply to the Donard forwards and winning vital possession.

Kieran byrne gave an exhibition of wing forward play from start to finish, reeling back the years with fantastic box to box running.

Michael Mangan and Matthew Manley were now dominating the middle of the field and every player left every ounce of energy on the pitch to record another 2 points in the league and another great team effort.

Special mention to the players like Eric Fenlon, Conor Hanly and Alan Norton who are only playing their 1st full match. Alan Norton gave a man of the match display at full forward and scored 1-2 in his 1st start this season.
Well done to all concerned.