Injuries take a toll in Blessington 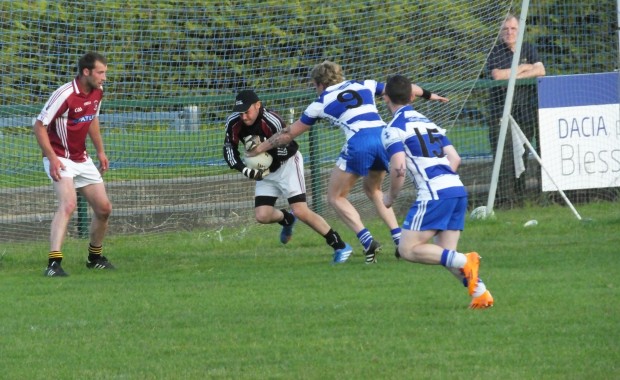 A battling second half performance was not enough to get a result away to joint league leaders Blessington in round 7 of the Campus oil division 2 league.
The final score line does not reflect how with just a couple of minutes left on the clock, a deserved draw or even a victory was on the cards.
However, even with the heroics of Patrick Cronin in the Stratford Grangecon goal, this game slipped away from their grasp with only moments to go.

The result and final score line is very disappointing, but heads can be held high as even though the team was decimated with many experienced and influential players injured or absent, the stubborn determination to succeed that John McCormack has instilled in the squad this year, shone through brighter than ever before!

Stratford Grangecon suffered their first defeat in the Intermediate League this year when we went down by 4points to Blessington on Tuesday evening in Blessington. A scoreboard that would misrepresent the spirited brave effort our lads put in under the circumstances. The continued loss of Jason Bolger, the absence of Eoin O’Neill, the loss of Michael Mangan through an injury early in the game all combined with the suspension of Alan Norton and the late arrival of Marcus Hanbidge meant that John McCormack had to field a depleted inexperienced team. Despite all of this we were still in contention for the points up to the last two minutes. We had a number of chances of scoring a goal with the ball rebounding off the woodwork and Michael Carroll fluffing his opportunity of scoring a goal, however, having said all that Blessington were a more balanced team on the night.
Kieran Byrne’s masterful display throughout the hour made Blessington players look very ordinary indeed but it was Patrick Cronin’s performance in goals that was the talk of the evening, his brilliants meant that his team were level with just two minutes to go when Blessington took the lead with a well taken point and grabbed a late goal with the last kick of the game.