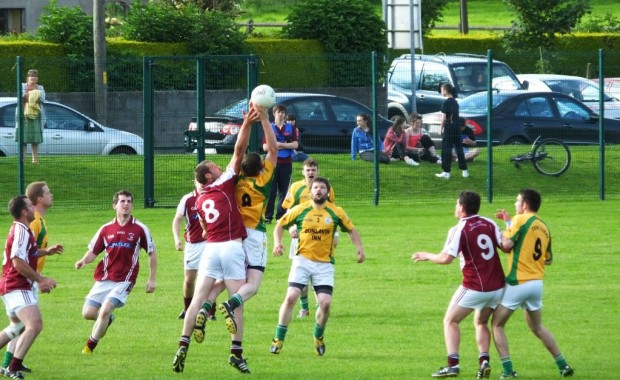 Stratford/Grangecon suffered their first defeat in the Intermediate Championship at the hand of their neighbour and Championship favourites, Dunlavin, by the narrowest of margins, 1 – 8 to 12pts in Baltinglass on a sun kissed Sunday evening. Stratford/Grangecon can understandably feel disappointed that they did not earn at least a draw from this encounter. However, they have every reason to feel that John McCormac has a lot more improvement to glean from this particular squad of players.
The following match report is provided by Peter Keogh…..

It took the intervention of county Minor Gary Allen to save the day for Dunlavin in this cracking match in the Intermediate football championship match at sun kissed Baltinglass on Sunday evening.
This win saw Dunlavin keep their unbeaten run in championship and league under Ashley O’Sullivan this year, but this was one that almost slipped away. Like all battles between neighbours this one brought out the best in both teams and could have gone either way. This was the best contest that I have witnessed in the Championship so far this year and it lived right into the dying seconds. In the end it was a point from a free that brought the Kildare border side level when it mattered most. And the hero of the hour was county minor Gary Allen who came on a sub late in the game and won and pointed that vital free close enough to the 59th minute. Then when a draw looked almost certain a great point by midfielder Daniel Dawson from long range sealed the issue
The sides were level seven times in this ding/dong battle. Stevie Carthy had the first point of the match for Dunlavin but midfielder Mark Landan equalised. Young Matt Manley put Stratford/Grangecon in front for the first time in the 6th minute. After Dunlavin had taken the lead again when full forward Thomas Davis sent over one point from a difficult free and another from a 45 Ciaran Byrne began to make his presence felt at full forward at the other end. He sent over a sweet point to bring the sides level for the third time in the 15th minute and five minutes later struck for the only goal of the match. That score, plus an excellent point by Alan Norton kept Stratford/Grangecon in front up to half time when the score stood at Stratford/G 1-4; Dunlavin 0-6 – Shane and Stephen Carthy and Davis adding late points for Dunlavin.
A point from a Shane Byrne free stretched the lead on the restart but points by Paul Murtagh and Thomas Davis who had moved out to bolster up mid field for Dunlaven brought the sides level for the fourth time. Shan Carthy, who’s strong running was troubling the Stratford defence edged Dunlavin in front with s long range point in the 9th minute of the half; Mickey Carroll who was having a great game levelled the game again. The deadly accurate Davis put Dunlavin in front from a free and set the stage for a hectic last quarter. Mikie Carroll levelled the game again and young Shane Byrne edged the Slaneysiders in front with seven minutes to go. Dunlavin may have had a small edge in fitness which could have told at that stage or it could have been that Ashley O’Sullivan had more talent left at his disposal on the bench. One way or another it was the introduction of Gary Allen that was to turn the tables in the end. In a nail biting finish young Allen was fouled and with Thomas Davis now injured he took the kick himself and sent it over to level the game one more time.
The game was still there to be won and it was Daniel Dawson, the star the Championship winning St Nicholas Minor teams that stepped up to take charge. He raced through from midfield to send over the point that gave Dunlavin victory.
Playing Thomas Davis a full forward looked to be a master move by Ashley but Stratford must have had inside information because they lined out with the strong and experienced Eoin O’Neill at full back. He had played a key role at center forward in their last match against Kilcoole but he was definitely needed in Defence for this big test. Anyway as it turned out Dunlavin needed Davis at midfield where Michael Mangan was causing a lot of trouble. The strength of players like Jason Bolger, Paddy Walsh and Marcus Hanbidge in defence insured that this was going to be a rather low scoring game. The Birchall Brothers, Louis Caplis and Jimmy Kelly were giving nothing away at the other end.
It would be a big surprise if both those teams do not make it through to the knock out stages
of the Championship.
Scorers – Dunlavin – Thomas Davis 0-5; Stevie Carthy and Shane Carthy 0-2 each; Paul
Murtagh, Gary Allen and Daniel Dawson 0-1 each.
Stratford/Grangecon – Ciaran Byrne 1-1; Mikey Carroll and Shane Byrne 0-2 each; Alan
Norton, Mark Manley and Mark Landan 0-1 each.
Dunlavin – Conor O’Rourke; Brian Tackaberry, Trevor Birchall, Justin Birchall; Jimmy Kelly, Kevin Miley, Louis Caplis; Danial Dawson, Thomas Kelly; Shane Carthy, Paul Murtagh, Fionn Deegan; Stevie Carthy, Thomas Davis, Gary Carroll.
Subs – Enda Bowes for Deegan; Shane 0’Rourke for Carroll; Gary Allen for Carthy;
Eoin Murtagh for Davis (Injured).
Stratford/Grangecon – Paddy Cronin; Marcus Hanbidge, Eoin O’Neill, Paddy Walsh; Jimmy Barrett, Jason Bolger, Shane Byrne; Michael Mangan, Mark Landan; Mikey Carroll, Manus Keane, Mathew Manley; Alan Norton, Ciaran Byrne, Sean O’Neill.
Referee – Kiaran Kenny, Tinahely. 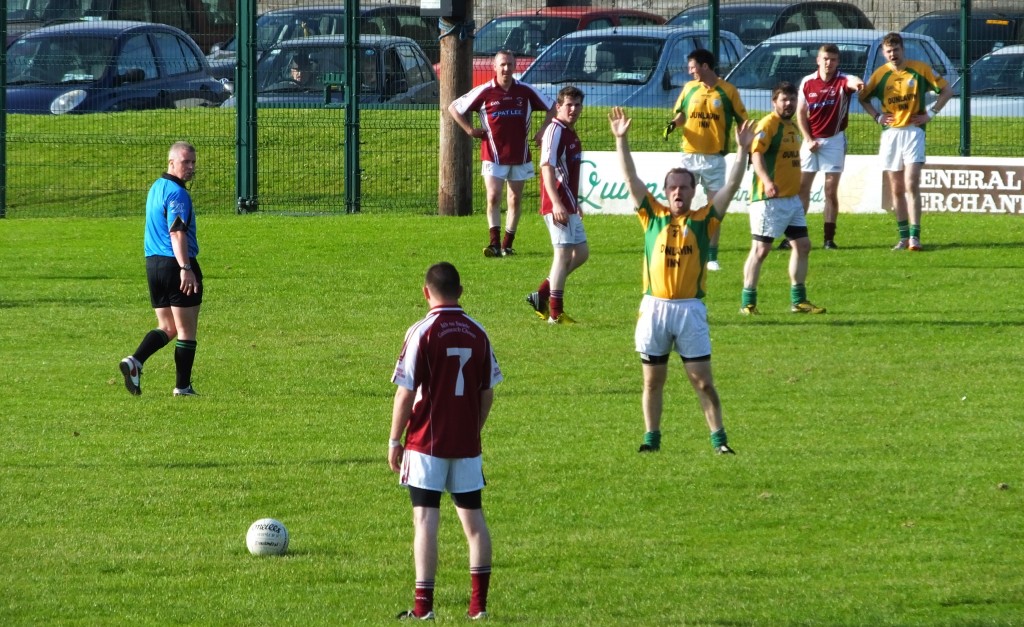 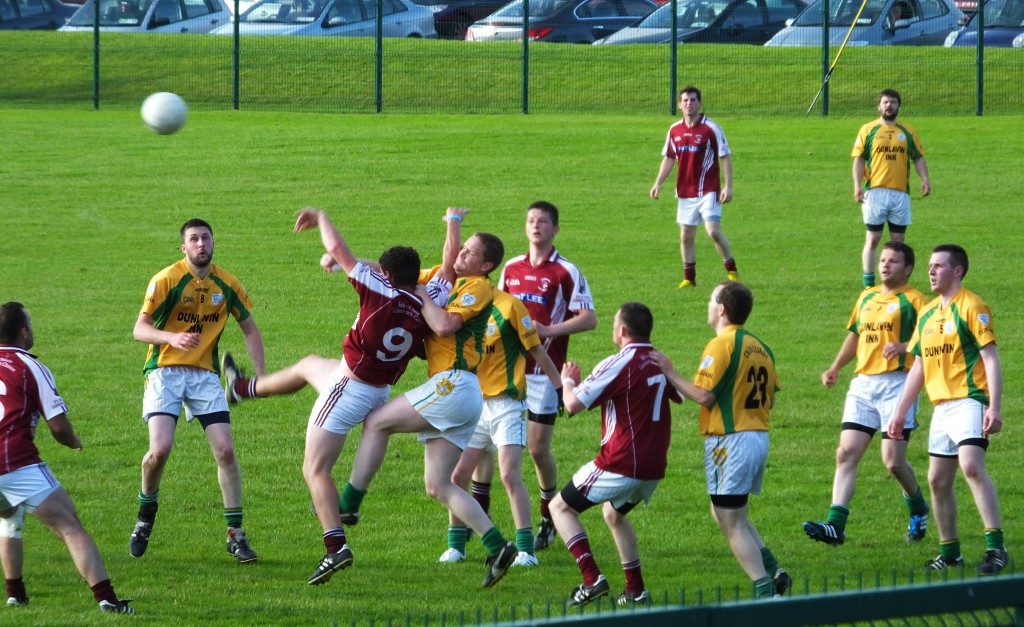 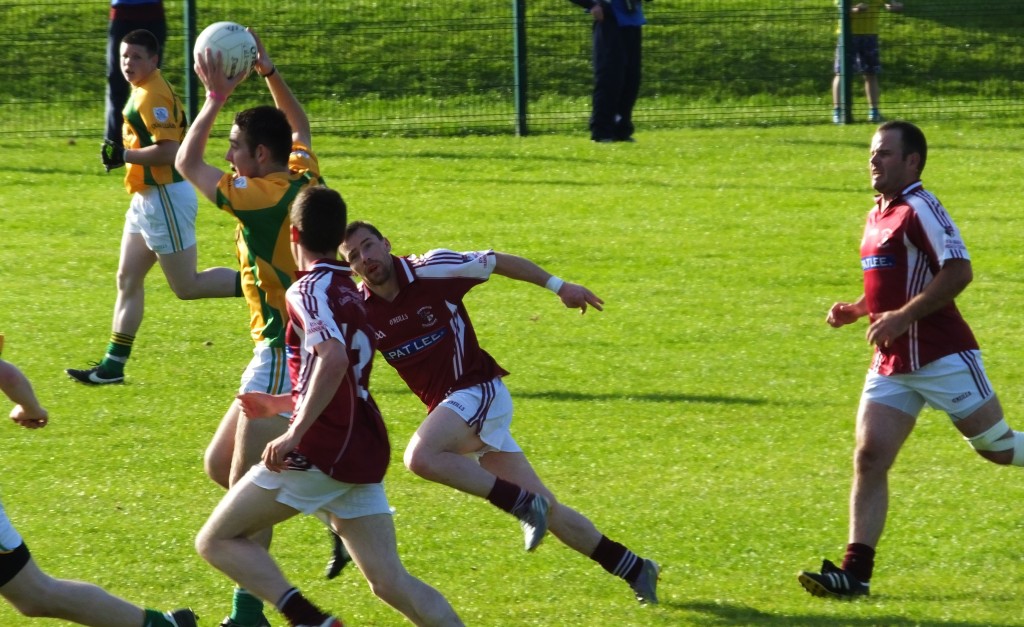