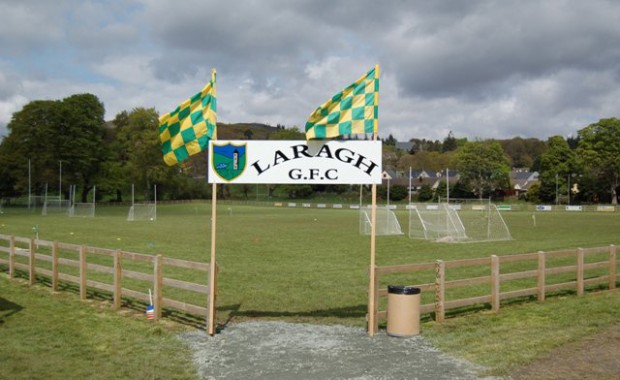 Hard luck to our Junior players who put in their best performance of the season so far on Saturday evening but it was not enough on this occasion against a strong Fergal Og’s team.
It was an important match as it was the 1st round of the 2015 Junior C Football Championship, however, with two games still to play in this group, all is still to play for.

The game was played in beautiful conditions in Laragh with a throw in time of 6:45pm on Saturday(4th). The team was unfortunately down on numbers for the game with a few players sending notification that disappointingly they could not make it.
The team has played a number of challenge games recently in order to prepare for this years Championship and with each game the teams performance has noticeably improved and the teams management must have been quietly confident going into this game, however, fitness is not great and there is a big difference between Challenge games and Championship football and so you just can never really know what to expect.
Straight from the throw in it became very clear that this was going to be tough, this was going to be a real championship battle.
Within a couple of minutes of the referees throw in, the men from Bray surged forward to score a very fine point and then follow it up moments later with a goal.
The game had just started and our lads were given a baptism of fire, the scoreboard was 1-1 v 0-0.

Fergal Ogs had an air of confidence and a spring in their step, little did they know but that spring was about to disappear. For the next 30 minutes our lads took the game by the scruff of the neck and controlled the pitch, they won practically every breaking ball, 50/50 ball and loose ball. At full forward, Connor Humphreys was causing the Bray side real trouble and blasted in a shot to get a deserved goal and then add a point, the team pointed a further five points from play to lead by four points. Our lads were now in top gear, had the possession and were causing havoc. The opportunities were not always being converted into scores but the scores were starting to come.
The referee called for half time and the score board read Fergal Ogs 1-02 v Stratford Grangecon 1-06. The Bray men after such an impressive start were now fortunate to be behind by only 4 points.

When you are winning and playing well, you never want to hear the half time whistle as it gives your opponents an opportunity to regroup.

The start to the second half was almost identical to that of the first half with the Fergal ogs men charging through to get an early point and goal but then they got another goal! They may have been fortunate and awkward goals but they all count and Fergal Ogs were now back in control. The score was now 3-03 v 1-06. The Bray men were fired up and the half time break clearly had taken the wind out of the Stratford Grangecon sails. Another couple of points were put over by the Bray men with out reply. The lads battled on in an effort to regain composure but the confidence and belief displayed in the first half was under pressure and injuries were starting to take a toll. Players picked up sprains and twists to ankles on the hard Laragh surface. Management emptied the bench but some players were absent so there was not enough substitutes available.

Ian Moore who had been moved into the centre half position was forced to retire with an injury with around ten minutes of the second half remaining. This required veteran Stratford Grangecon goal keeper Ultan Rooney to guard the goals so that James Norton who was playing in goals could play outfield. Ultan is recovering from a long term injury and so Declan Bollard who was at this stage playing at corner back took all the kick-outs.

Stratford Grangecon had a fair few walking wounded at this stage but the fight was not gone in them yet. Very slowly they crept back into the game and put another two points on the score board in between scores from the Bray men. Perhaps Fergal ogs were feeling comfortable with their lead but they were starting to loose possession and with a Stratford Grangecon team determined to finish out strong, enough chances were being created to think that a goal or two was still on the cards for the west Wicklow men.
The second half was interrupted with many stoppages due to injuries and so it was not clear how much injury time was going to be added by the referee but it was going to be a few minutes at least. A Fergal ogs player went down with an injury in front of their goals and following that, the referee decided it was best to blow for full time to allow for treatment.

Fergal ogs were deserved victors of the game and ended up on the score board clear winners. They take away the valuable Championship points back with them to Bray. It could have been different. Our lads will be very disappointed with the result and especially the final score which was harsh, but they can take away some satisfaction from the fact that they gave it their best and for a large part of the game they were the better team. When the pressure came on they never gave up and showed that there is good character to this group of players. This should stand to them in the next round.

The focus has now switched to the next Game in the Championship against Coolkenno on the 18th. A win in this next game is now crucial and management will be eager to get the players back to the training ground. There is two weeks to work on a few things and prepare for the game. Nothing worth winning ever came easy.

Training has been scheduled for this Monday night at 8pm!

Share "Great effort but Juniors fall short in Laragh" via