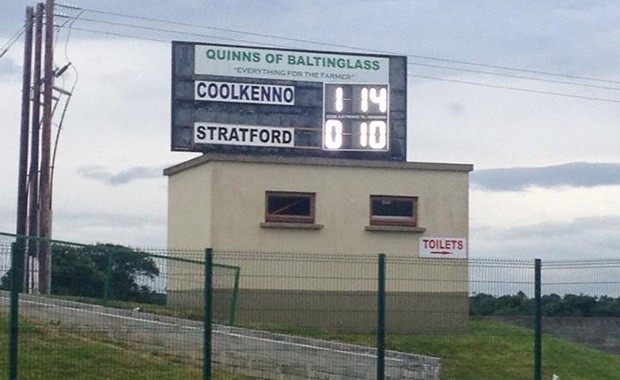 On Saturday evening our Junior team played Coolkenno in the 2nd round of the group stage in the Junior C Championship. The game became a knock-out round following Kiltegan’s withdrawal from the competition.

After the tight player numbers we had for the 1st round, Management were delighted to have a large turn out for this game and had for the first time this year, the luxury of a full bench of substitutes.
Unfortunately for our lads, Coolkenno came out firing on all cylinders straight from the throw in and we were a little slow this time to react to the pace of the game.
Coolkenno worked the ball in with pace and managed to achieve a nice score advantage inside the first 15 – 20 mins. Our lads as have shown previously do not throw in the towel easily and gradually dug in and gained a foothold in the game during the later stages of the 1st half and just a single goal separated the two sides.

Our lads started the second half in determined fashion with a view of overhauling the Coolkenno men’s advantage, however it just seemed to be one of those days when things will just not go your way. We had an equal amount of possession but the ball would just not bounce kindly for us on the Baltinglass turf and a few passes went astray here and there. This Coolkenno team were proving hard to breakdown and continued to put pressure on our defence. As the clock ticked down, it became clear that we needed scores quickly and making an assault on the Coolkenno goal in the hope of sneaking a couple of goals seemed to be the best option.

However, despite a few opportunities and half opportunities, the Coolkenno defence stayed resilient and held on to their comfortable lead of 7 points until the final whistle.
With this result our lads bow out of the 2015 Junior C Championship.

Credit must be given to Coolkenno who obviously came well prepared and on balance, fully deserved the victory. We wish them all the best in the Championship.